A sunny afternoon some weeks ago, J and I decided to visit Oceana on a Groupon. Yay for lunch on a deal! Previously the only times we had both gone to Oceana was during the annual Students’ Union Christmas party (and those times were good too). Lunch was a completely different affair though, and I must say… well, I shan’t spoil it for you just yet.

Oceana is rather quiet in the afternoon, with only a few tables taken up by office workers and most of the restaurant being pleasantly empty. I say pleasant in the sense that there’s no sense of forlornness in the empty space, only a welcoming and inviting atmosphere. Sunshine through arched windows and a cool interior do a lot for a place. You do have to dress up a bit more for this place though; J and I went in business casual wear.

We forwent the appetizers because the bread was quite enough. There wasn’t anything extremely special about the bread, but there is something tasty about just bread and butter. 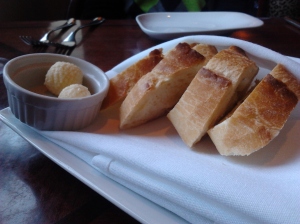 My entrée came quickly enough; I ordered an Eggs New Orleans (17) which consisted of poached eggs on crab cakes covered by a jalapeno bernaise, accompanied by fresh fruit and a salad of field greens.

Man, was this ever good. Just one look at the picture makes me tummy rumble again. The crab cakes were hot, crisp and light on the tongue. The poached eggs, while not quite reaching the perfection of OEB, were a surprisingly delicious combination with the crab cake. Normally I shy away from hollandaise sauces because they’re too thick for my tastes, but the heat in this sauce made it rather all right. It was also a little unavoidable because (as you can see) they covered both the egg and crab cake well. Field greens as well as the cantaloupe went well with the crab cakes, ensuring that the dish did not feel too heavy throughout the course of the meal.

Mmm. I think I might just make that my new phone wallpaper.

J ordered the Peppered Beef Tenderloin with a Mushroom Peppercorn Sauce (19). (Edit: I couldn’t find the picture T____T I apologize, dear readers. This makes me sad rather much.)

Then, since we had money to spare on the Groupon, we grabbed a dessert. YAY for sweets ^^. 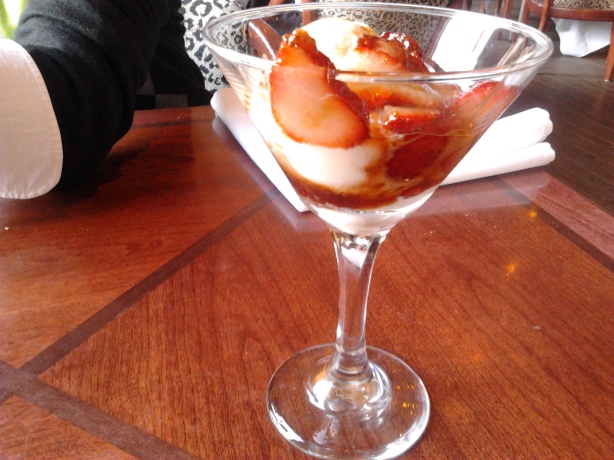 Up here you see a fairly simple strawberry flambé (~8; I forget the exact price). Brandy and sugar are poured over sliced strawberries and fired to remove the majority of the alcohol content and to create delicious syrup. The resulting strawberry mixture is then poured over ice cream, and it is oh-so-good.

I don’t think I minded at all dressing up for this restaurant ^^.

Pros: Tasty food and a very pleasant atmosphere. Despite the business crowd I really didn’t feel that out of place. Service was pleasant and the food was well done. I find the regular prices a lot higher than what I’d pay for lunch, but this is downtown dining. Individual components of food were done well and overall the experience was enjoyable. J enjoyed his dish tons too.

Cons: There’s really nothing much to criticize about this place. There was some confusion about the Groupon, because apparently customers were required to indicate that they were using a Groupon when making a reservation and when being seated. Otherwise there’s little else negative to say about this place.

Good dining to you.