What’s the first thing that comes to your mind when you hear the word ‘schnitzel’? Wiener schnitzel? Do you hear it pronounced with a German accent, where the W is replaced with a V? Do you imagine it pronounced by a person sporting a big beard, white shirt and lederhosen?

I do, but that’s because I can be so clueless XD.

Anyway, here I was waiting for Ari to arrive. She’s back! I am so happy she’s back in town. We decided to find a new place to meet up, and since we live rather far apart from each other (one in the north and the other in the south) we decided to meet somewhere in the middle… downtown. 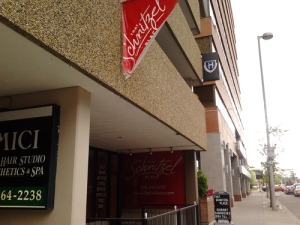 Wiener schnitzel is made from veal, but any meat treated in this fashion can be called schnitzel. Schnitzel (for those of you who were as clueless as I was prior to finding this spot on Urbanspoon) is meat that’s been pounded extremely thin, breaded and then fried. Boo to all you boys who started laughing once I said the word ‘meat;’ my male co-workers did enough snickering as it is XD.

The place looks like a fast food restaurant but smells like a cross between a bakery and a café. I don’t mean the dainty cafés where silly women pick at pastries; I mean the home-style cafés that serve heart soups and sandwiches. That Schnitzel Place has only one main entrée on its menu: a schnitzel sandwich. Sides such as homemade soups and salads can be ordered too. The owner was incredibly kind and attentive (his name’s David, if you want to know), explaining to us how to go about ordering food and even offering to cut one sandwich in half to suit our lady-sized appetites. Heh.

Ari and I ended up ordering two different sandwiches (9.75/sandwich) and cutting them in half to share. Ari ordered the week’s special, which was a B.A.R.T.: bacon, avocado, romaine lettuce and tomato on a bun with chipotle mustard to jazz up the chicken schnitzel.

I ordered Olga’s Original: Havarti cheese, sautéed onions and mushrooms, red peppers, red cabbage and sirloin schnitzel, all topped with a chunky tomato sauce. Oh man. Ohh man. That was a good schnitzel. There’s something immensely satisfying about tomato sauce that tastes as if it’s homemade and the way in which it combines with beef and mushrooms and cabbage. The cabbage and red peppers worked together surprisingly well, being cooked but not overly so; the onions were sautéed enough to be sweet and not limp and the mushrooms… well, I personally think mushrooms make almost any savoury dish better.

Ari’s schnitzel place was good too; we agreed that the sandwiches had very distinct flavor combinations. Although the half that I had of hers was cooler than when it had first been made, the individual ingredients were also done to perfection; I have never enjoyed bacon and avocado together so much.

I’m going back as soon as I can convince someone to come down with me. Hopefully by the time you read this post I will have found another schnitzel convert.

Pros: There’s a reason this place has been written about in several magazines (all articles proudly displayed at the front where you order): their food is good. Ari and I were the only customers in the store at the time which might skew our views a bit but from our experience, the service was warm and considerate and the food was fresh, hot and wonderful. $10 might seem like a lot for one sandwich (then again, Subway’s prices just keep rising) but the meal will fill you up because there’s a lot of high-quality food for your buck.

Cons: None. Alright, there was a bit of a wait for the food (15 minutes) which felt odd in a place that looked a little more like a fast food restaurant, but once the food came I had no complaints.

I’m going back for another one. Anyone interested in coming?