One chilly summer night (as is often the case in Calgary), J and I stopped by Lazy Monkey with Malt and Choco. Lazy Monkey, as some of you might remember from a few years back, used to be called Perfect Blend and was owned by another couple. My friends and I visited it quite a few times because, hey, bubble tea up in the Northwest is always a happy event. This time though, seeing as they had a full dinner menu, we decided to grab some eats as well. Speed-wise the service was very friendly; their staff is fluent in Mandarin and decent in English.

Our appetizer took a while but eventually came; we ordered their Taiwanese style fried chicken (台灣鹹酥雞; 7.99) as well as a skewer of chicken hearts (3.75). Not for the squeamish, but if you’re looking for it it’s located right under the chicken and reads: 酥炸雞心. It was really, really good. The fried chicken was tasty and spiced just right (especially according to J, who’s been craving Taiwanese food ever since three years ago, haha) and the chicken hearts were actually juicy little morsels. Sorry if that sounded squicky to you, but I’m just telling it like it is.

Malt and Choco decided to order their own separate dishes and J and I decided to share. The menu is actually pretty pricey, considering it’s café-style food. Our food took a while to come so in the meantime we nursed our respective bubble teas. I didn’t order bubble tea because I’ve had previous bad experience with their milk teas. J and Malt both agreed that the bubble tea was pretty regular; nothing special.

Malt and Choco’s dishes were pretty packed, which was a good thing. Malt ordered the crispy chicken thigh dish (酥炸雞腿便當; 10.99) and Choco ordered the seared salted fish dish (香煎鹹魚便當; 10.99). Malt enjoyed his chicken, so you know that’s one thing they do well for sure. The seared salted fish was apparently a bit dry and lacking though; after eating half Choco declared that she had had enough of it.

Our curry (咖哩蛋包飯; 10.99) on the other hand was very warm and delicious. The egg wasn’t wrapped perfectly (hey, making omurice requires a certain technique) but it was cooked well. Curry was standard fare but still tasty. What’s more, because it was hot and we had been drinking cold bubble tea it tasted so much better. If the price weren’t so high I’d make this a regular spot; curry and rice means instant comfort food. J and I scraped up every last bit of sauce and then stole rice from Choco’s dish to get the rest of the sauce. Nom. 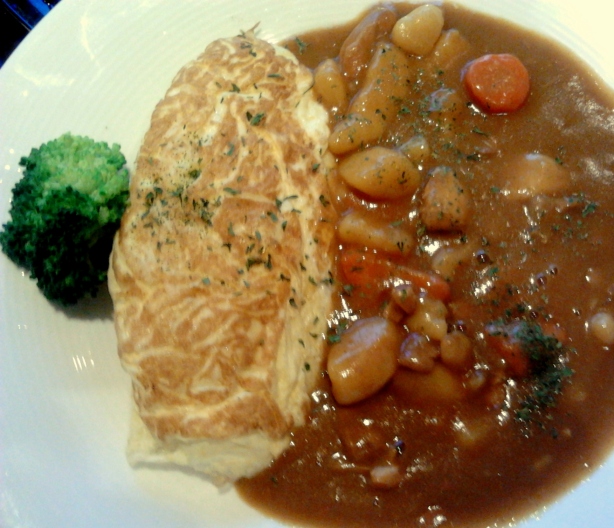 Pros: For the most part, Lazy Monkey offers hot tasty food and friendly service. I quite liked the atmosphere too because it was pretty casual.

Cons: Pricey, considering the quality and type of food. I don’t usually expect to pay $15-$20/person just to eat café-style food. Chicken might be their specialty but fish there doesn’t seem to be cooked as well. Also, depending on when you eat the place can get noisy because it caters to a mostly teenage audience.

While the food was good and the curry rice still leaves an impression on my mind I’m not so convinced that this is the best place to spend my money. I’d come back definitely to hang with friends and grab some drinks and snacks, but I’m better off cooking my own dinner for much less.