There are many hilarious resemblances between my Vancouver family and my Calgary family, like how both my uncle and dad will leave a little bit of food on the plate at the end of dinner and go off in search of dessert instead. They like their sweet snacks, too.

T-rex also makes weekend noodles, which reminds me quite gnawingly of another guy that I miss rather much. 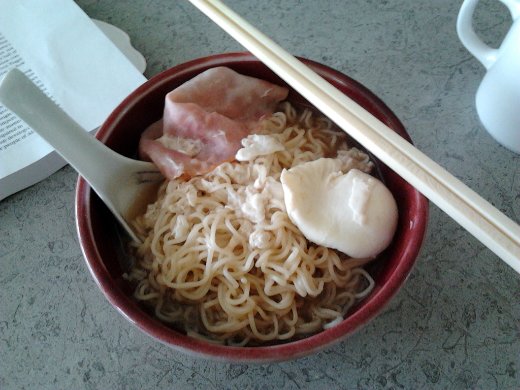 And yeah, both those pictures are of food. Maybe that’s how I find home in new places: through eating.

Anyway, life has been pretty great, because everything from my classes to my feeling of home in Vancouver has been way better than I could have imagined. With that in mind I really can’t ask for anything more, yet this morning I felt moved during prayer time to ask God for a female Christian classmate with whom I could be good friends (EDIT: checked my journal and I wrote: “I would like to find a sister in Christ in the secondary program. I don’t know why exactly I’m asking for that, but if it’s Your will, Lord, let me find a female peer who loves You and follows You too”.) I was hesitant at first, asking for such a thing in prayer, because usually I ask God to change me and I haven’t really ever asked Him to give me something outright. But, moved I felt so prayed I did.

Come break time today I wNas studying alone and feeling alone when I felt something crawling up my leg. My first reaction was that I was imagining things, until I grabbed at my pants leg and felt a very un-imaginary little body. Of course I crushed it in sheer horror (thoughts of a vengeful spider or the scarabs from The Mummy came to mind) and immediately I felt this sharp pain. A dirty great stinger was embedded in my leg and the bee, which had between so dutifully exploring my calf, rolled out ignobly onto the linoleum.


Ugh. Luckily I am prepared usually with antibacterial stuff and Band-Aids so I yanked the stinger out, made like a brave soul and pouted.

Deserted by humans and damaged by insects, is what I thought as I limped to my next class. The classroom I was in began to fill up and then another girl sat down. She was wearing a very prominent cross so I asked, as we introduced ourselves, if she was a Christian. She was. Later we were talking about the churches we went to and she mentioned this small one on 47th near Fraser…


… and it turned out we attend the same church, just in different congregations! As she talked I suddenly remembered my morning prayer, and the realization that God was giving me even more goodness was so ridiculously mind-blowing. I don’t know what the future will hold, but I know that in this moment I have experienced once more that our God is so good.

Bees are dangerous, but they sure hover near beautiful things.