I know very little about Ukraine, its culture, its people or its language. But I do love pierogies. My mistake lies in calling these Ukrainian pierogies though, because the Ukrainian pierogy should actually be called varenyky. According to Wikipedia the Mennonite way is to bake pierogies and serve with borscht, and with borscht indeed we had our pierogies (or varenyky?) but instead we served our pierogies the Polish way; that is, boiled and then fried with butter and onions. And prosciutto, just for good measure.

Maybe we really had no idea what we actually cooked up but we thought it was delicious.

Before I go on though, let’s meet the actors! 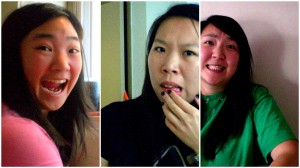 Before you, you see Pink, Joy and Jems. Seeing as we were all free we decided to make food according to a theme: Eastern Europe! There’s something quite enjoyable about making food that comes from similar cultures; tastes just go better together. Mind you, pretty much all the facts I recite come from Google-ing information, so I do apologize for any errors. Feel free to point out corrections that should be made in the comments section; I’m always open to learning more about other aspects of cultures (=

Our time limit was 4 hours and within that time we planned to make:

We decided to begin first with the bread, since the dough had to sit by itself for a while to rise. That was when Pink brought out her ultra-machine: the Kitchen Aid Stand Mixer. Golly it was gorgeous. Also, the dough hook is pretty mesmerizing in action. Whoever designed it was a genius.

Within fifteen minutes or so we had mixed our dough; within another hour it had risen enough that we could divide the dough and braid it together.

Pink brushed the ring with olive oil, dashed on some sea salt and popped that away to bake in the oven.

Now while the bread was rising we had been busy at work. There’s no point in sitting on your buns when buns are a-rising!

Sorry, I just had to put that one out there. I know it’s a pretty… half-baked joke. HAH.

To make our borscht (because all blustery fall days need borscht at some point in time) we grated two beets, three carrots, chopped up an onion, opened a can of whole stewed tomatoes and chopped up a potato (or three. More on this later). Then we dumped the whole kaboodle into a pot and began to boil. I know… onions and butter first and then other veggies, right? But dumping everything into the pot works too, here.

Of course, only one person at a time really needed to chop vegetables, so the other two of us (Jems was studying and taste-testing) started work on the pierogies. Or rather, I should say, Joy made the dough for the pierogies all by herself.

Everything was running smoothly it seemed, and we were well within our own time limit, until I looked into the pot and realized we were only boiling one potato… for at least 30 pierogies.

Originally we had cut up three potatoes and put them into one bowl for the pierogy stuffing, and cut up another potato in another bowl for the borscht. What had happened though was that Pink and I had happily grated all the rest of the borscht ingredients into the three-potato bowl, and then dumped everything in without realizing our mistake.

The only solution was to fish the potatoes out of the soup.

And fish we did.

Eventually though, we finally had everything going right again. The borscht was simmering, the bread was done baking and the pierogies were ready to be stuffed. We mashed the potatoes together, chopped up some smokies that were on sale (and they turned out to be cheese-filled sausages, so that was a total bonus since we didn’t buy cheese!) and threw the entire lot together. Then we all rolled up our sleeves and got to work. Joy’s dough was cut into circles and we began laying the pierogies on a floured pan which went into the freezer as each one was filled.

For first-time pierogy-makers, we felt like we did pretty well. Hurrah for learning.

As the second pan of pierogies went into the freezer we began eating the soup (which was well done by now) as well as the bread… and then we began cooking the pierogies. Pierogies are typically boiled first and then baked OR fried with butter and onions. We took the whole thing one step further by frying the pierogies with thin strips of prosciutto, which is a raw-cured, usually thinly-sliced ham. Oh noms.

And finally, finally… our meal was served.

Adieu (or прощання) my friends (=