‘Twas a windy brisk morn and J decided that it had been far too long since we’d gone out on a Groupon.

Hence, the Jacqueline Suzanne Bistro (presenting The Carmichael)! Such a long name for such small restaurant. The real name is The Carmichael… but it seems the name Jacqueline [and] Suzanne’s Bistro is still sticking on.

Now before we get started here, let it be known that those using a Groupon should probably make a reservation beforehand always, as a precaution, because some restaurants care and others don’t. At the Jacqueline Suzanne Bistro, they care… but the waitress was gracious and friendly and let us in anyway. We must’ve looked cold and hungry, and the restaurant felt warm and classy without being snobbish in furnishing.

A quick perusal of the menu brought us to a swift conclusion. Today we would splurge… with an appetizer before the main course. We also wanted to make the most of our Groupon. Our appetizer was the chef’s special soup (small, 6): a bacon, leek and potato chowder that warmed us to the tip of our toes as we sipped. The chowder was almost everything you could want in a chowder: savoury, creamy, and hot. Personally I would have enjoyed a thicker chowder (maybe the potatoes needed more time, seeing as we were their very first customers of the day) but the taste was delicious. 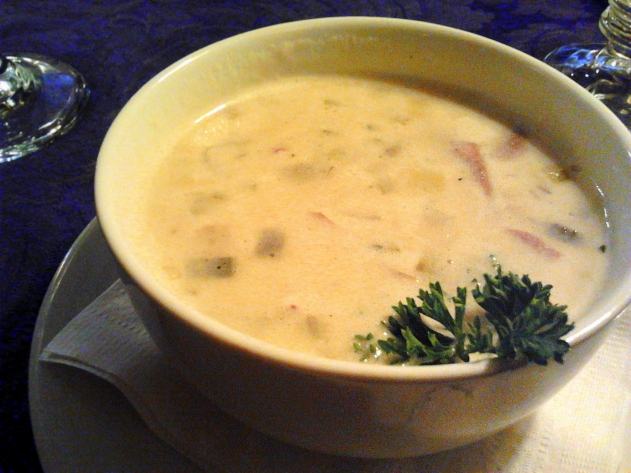 The main courses came a little slower afterwards and with appetites spurred on by the taste of soup still lingering in our mouths, we were very ready to dig in. J’s dish was a hearty jambalaya (16.75), full of shrimp, chicken, and spicy sausage served over rice. The sauce was well-spiced and the proteins well-seasoned. Unfortunately they chose to leave the tail in for the shrimp. Mind you, the tails are edible, and I do eat the tails if they’re crispy enough (in tempura, for example), but having tails in this sauce and over rice didn’t seem like the best choice to me. Apart from the shrimp tails though the dish was served fresh and steaming and J was quite happy with his choice. 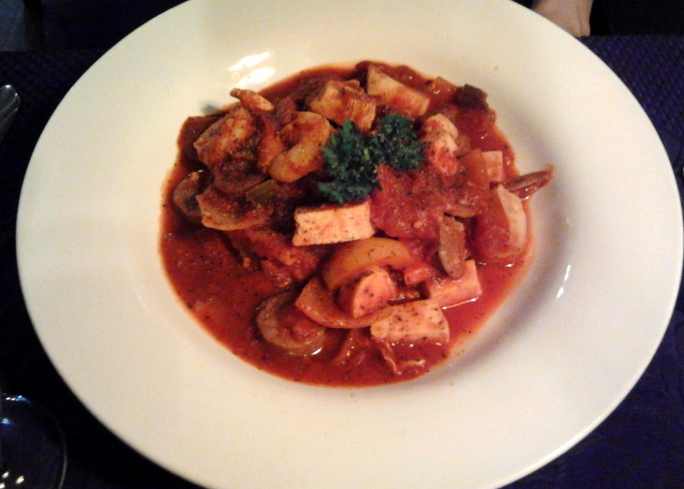 My dish arrived at the same time as J’s and I have to tell you first, I’ve never been a fan of savoury crepes because I don’t like the cream sauce that usually accompanies such dishes. I also am not a fan of green salads; they make me feel like a rabbit. This being said then, I have no idea why I ordered what I did: crepe Suzanne (16.50) filled with chicken, ham and Monterey Jack, accompanied by a house salad (with just a tad too much dressing). And you know what? That dish was delicious. The crepes were crisp, the sauce not too heavy (although you could clearly taste the Monterey Jack), the chicken was tender (not dry!) and the house salad… well, some things don’t change. But I ate up every bit of salad (see, Mum, I’m a good girl because I eat my veggies) because it paired extremely well with this wonderful dish. Om nom nom.

The wait to pay was long. Again, I think Calgary restaurants overall have this sort of problem… but the service was warm and friendly and the meal was great. J and I left the place feeling well-fed but not overfed, and that, my friends, makes plenty of difference.

Pros: The food is tasty and, for the most part, very well done. The service is very friendly, and the portion sizes are pretty spot-on.

Cons: While the service is friendly, we found the waits to be on the long side despite the restaurant not being very full at all (’twas a Wednesday morning). If not for the Groupon I would find this place rather expensive, and yet, J and I are in agreement that we’d come again if ever we wanted a cozy place to celebrate a special occasion.