Life has been an absolute blur for the past two and a half months.To catch you up to speed, I (Andrea) finished my classes on August 8 and flew back to Calgary on August 9. The last month in Vancouver was ridiculous good: I celebrated my birthday on a beach (first time!), rode on a motorcycle, received a scar from my first swordfight and ran in crazy weaving paths past midnight in downtown Vancouver after watching a brilliant mass of fireworks.

Leaving Vancouver so immediately after classes was difficult too. I felt as if I didn’t say a proper goodbye to my aunt, uncle and cousins, despite them having so graciously taken me into their home for the whole year. Scratch that, I didn’t feel like I had said a proper goodbye to a lot of people who had shown me tons of kindness over the year: classmates, close friends, fellowship friends and even the city itself were all left behind in a rushed blur. I chose this, yes, but I didn’t think it would be so mentally and emotionally jarring. I had blog posts planned for my post-Vancouver time in Calgary but I never got to it. I don’t know if I will. The rush has made me feel like I’ve left bits of me strewn along the way, really, with unsaid words and hours of unspent time with friends.

In fact, after my year in Vancouver, I don’t know if I want to ever spend only one year in a city, because I feel like a year is simply not enough. If it were possible I think I’d split part of myself so I’d continue building relationships in every city that I had a chance to live in. There’s something intoxicating about getting to know people and their stories, ah, their stories are the syrupy wine of life.

Once I got home the madness began. Jack would come by around 7 in the morning every day and we’d plan out our day to maximize efficiency. Our to-do list included buying and making decorations for the wedding, buying a bunch of random things for the wedding in general and setting up grown-up things like joint bank accounts and travel insurance. Corl, Chriss, Char, my family and Jack had been amazingly productive the entire time I was out of town and their work was the real reason that things did not go completely bonkers. Planning a wedding means looking at ridiculously tiny things and while the whole thing was a little wild, I’m glad we actually decided to get married in such a short time so we didn’t have too much time to obsess over details. God definitely gave us the grace to take things as they came and things turned out well. 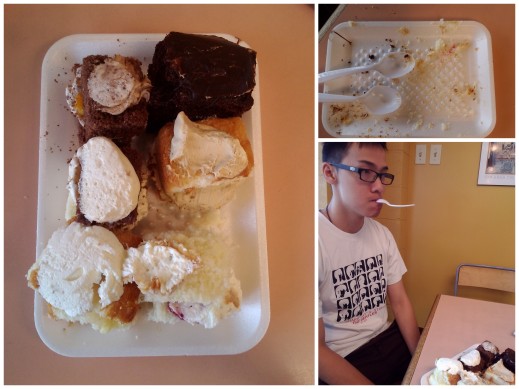 One of these tiny things included the cake. An auntie had earlier told us that she was interested in making the cake for us, but after a long series of delays, nothing happened. We rushed to find a cake that could be used as both the cake for cutting and the cake for eating and eventually decided on Amandine Bakery for the cakes-to-be-eaten. Here’s Jack all ready to eat and here are the samples we had. They’re not presented the most elegantly (the styrofoam kinda gives it away) but Amandine is definitely the go-to place in Calgary for quality cakes.

Starting from the top-left hand corner going clockwise we decided we were going to choose from six flavours. There was chocolate Grand Marnier, sacher torte with apricot jam, cappuccino fruit, strawberry shortcake, Bavarian fruit and Irish cream. The white cakes were really light in flavour but the cream in both the cappuccino cream and Irish cream were well-flavoured. We ended up choosing the sacher torte, the chocolate Grand Marnier and the cappuccino fruit… I think. The funny thing is that Jack and I don’t remember already what the cakes were. That just goes to show all you future to-be-married people that the cakes don’t really matter (and they shouldn’t be the most memorable part of your wedding anyway).

We also had fun picking out the candles for the lighting during our Wedding Shopping Week of Madness. If you’re smart and you know it you’ll figure out what was going to go wrong with the candles we were looking at, but we had no idea what would happen at the time of purchase.

Next time: Andrea Decides to Make Her Own Wedding Cake (and we all know how well I make food under pressure. Hint: I don’t, because my world implodes when I try).