The drinking culture in England is definitely quite different compared to the treatment of alcohol in Canada. Many pubs here are regular haunts for families; it’s not uncommon to see a number of children running around the place while their parents chat over a pint or two. Buying a round instead of purchasing individual drinks is a common courtesy too – of course, it’s expected that you don’t skip out when it’s your turn to buy a round for the group. 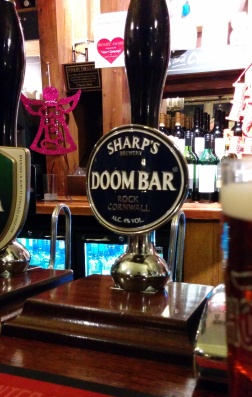 Because alcohol is so much more accessible in Britain than in Canada, the connotations of drinking are also different. Drinking isn’t a taboo topic in schools so much as it is a part of education: alcohol is something to be taken in moderation, if at all depending on your choices and beliefs. Teachers in Canada are warned strongly against mentioning anything to do with a bar in the classroom; teachers here just do their best to avoid parents and kids in the pub only so they don’t have to be confronted by thoughts of school all the time (although school is what teachers at the pub mostly talk about).

It made sense then, that within a month or so Jack and I found ourselves out with the science department at least once a week, enjoying a pint and having a long chat. I much prefer the British experience in pubs, I think, especially when everyone buys rounds for each other. You end up paying the same amount as if you were to buy the same number of drinks for yourself, but the spirit of camaraderie and fellowship is much more prevalent in buying for other people. I also enjoy the fact that we’ve frequented the nearby pub so much that we’re on first name terms with the local barmen.

My annoying pub habit is probably that I’m not a drinker, but I’ll pester everyone to start ordering food because I’m hungry. I don’t think the guys mind because this means I’ll usually order a sharing platter while I bug them. Thankfully Artemis is usually in agreement with me, and she’ll order food and dessert with me (you can read about the food in more detail here). One time the cook forgot the eggs on Artemis’ steak. When she reminded them they apologized and quickly brought out two eggs. I don’t know why, but the poor pair of eggs looked quite funny at the time.

We also had weekly darts nights for a while, and that was great fun, until we moved onto pool. I’m still learning how to manage my short self at the table. We don’t go as much anymore though. Everyone’s schedules have been busier lately and some of us are leaving for greener pastures soon, and by that I mean people are moving to different schools, not that they’re dying. Still, the times have been quite enjoyable. And that, I suppose, about sums up our British pub life.