Pho cravings in London are the worst because they’re terribly hard to satisfy here.

NOTE: I don’t usually review chains, but seeing as this contributed to how much we miss our Asian food in Canada I had to say something.

One day when Jack and I were out exploring the surrounding area (Old Spitalfields Market post coming up soon!) we stumbled across this place and thought with hope that perhaps our pho cravings would finally be met.

The décor was nice enough: twiggy balls floated above packed tables and the full house surely spoke of good things to come, we thought. Service moved quickly and the restaurant was warm with smells of cilantro, peanut sauce and sizzling meats. 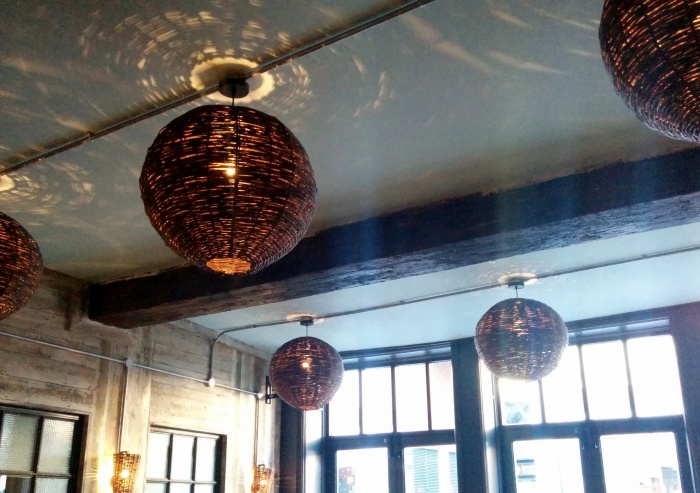 Our food came fairly quickly. Jack’s dish was the bún bò huế (hot and spicy soup brisket beef) with pho noodles (£8.50). In his words, the dish “failed on so many levels” and I have to say I agreed. The noodles were cooked to a somewhat al dente texture (never do this in noodle soups, please), the spicy soup was lacking in spice and the overall dish lacked any particular redeeming points, save that it filled his stomach. 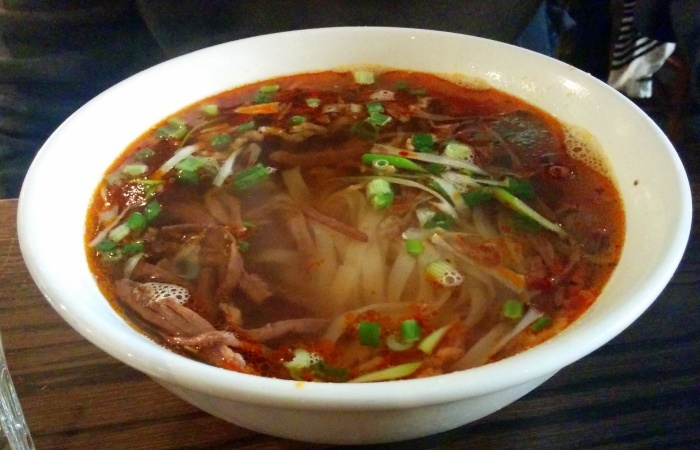 My dish, on the other hand, was the chicken bún (£7.75), a bowl of wok-fried chicken, vermicelli noodles, a veggie spring roll and peanut sauce. Yet again, the dish had almost all the right components but I found that each part had something lacking to it. The vermicelli was of a much thicker variety than I was used to and firmer than necessary, the meat lacked flavor and the shredded veggies were too large to munch on in comfort. This particular last point suggested that whoever cooked the dish didn’t understand that eating quickly with chopsticks is easiest done when the vegetables are in finer strips. Most of the flavor of the dish came from the peanut sauce and I actually asked Jack to help me finish my dish, something I rarely ever do. 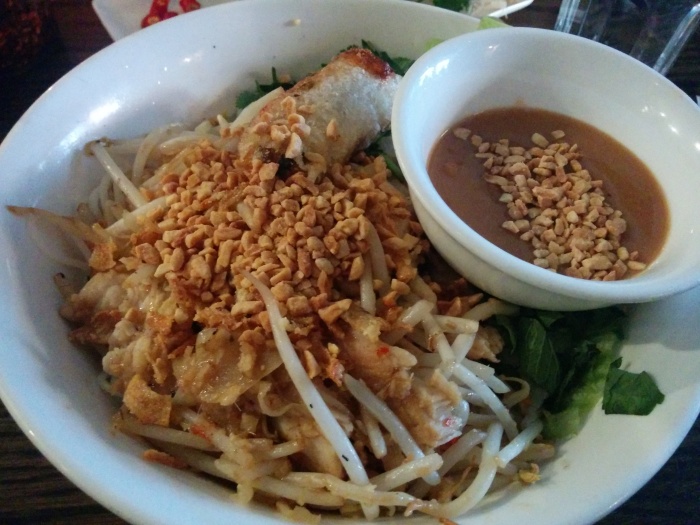 Oh London, I hope this isn’t your best shot at pho.

Cons: The food here falls a little short in executing all its components correctly: meat, veggies, soup and noodles. Unfortunate.

Sorry, Pho Spitalfields, but you’ve somewhat scared us off of trying to find good Vietnamese pho in London.