Our last full day in Scotland began on a misty morn, at the top of a lighthouse in the city.

And without fail, over the radio of a passing car below, we heard the unmistakable strains of a bagpipe singing goodbye.

Well, okay, we had to climb the lighthouse tower first. And before that came breakfast. I don’t think I’ve talked yet about how great the hotel breakfast was. As mentioned previously we couldn’t find a hostel to stay in while in Glasgow, so we stayed at a relatively low-cost hotel in downtown Glasgow near the train station. The cost was almost double what we paid for the hostel in Edinburgh but every day began with a hot breakfast buffet (hash browns, tomatoes, potato farls, beans, mushrooms, bacon, sausages, toast, muffins, fruit and fancy coffee), so all in all we were quite happy with the place.

After such a delicious meal, we set out to find The Lighthouse, home to Scotland’s Centre for Design and Architecture. There were several exhibits concerning community projects in and around Glasgow but what Jack and I really enjoyed was the Mackintosh Centre, a permanent exhibit of Charles Mackintosh’s work. We had visited the Mackintosh House on the previous day but at both locations we hadn’t been allowed to take photos. The only photos we have are those from off the top of the roof of the Lighthouse, which can be accessed via dizzying flights of stairs.

The Mackintosh House that I mentioned is a reproduction of a house originally built and designed by Charles and Margaret Mackintosh. Although Charles Mackintosh is arguably the more well-known designer, the tour guide explained that Margaret was not only an artistic individual in her own rights but that the two worked together to produce distinctive styles in textiles, paintings and architectures. In the Mackintosh Centre then we noticed a number of recurring themes in Mackintosh’s work, such as: the Glasgow Rose, simple bud-like shapes and narrow geometric patterns. The neat thing about listening to tour guides and reading placards is that we began to pick up on the things they were discussing to the point where I found a piece of jewelry and thought it very Mackintosh before realizing that it was in fact a design made by another artist, inspired by Mackintosh’s work.

After we left The Lighthouse, our next stop close by was the Glasgow Museum of Modern Art. There we were greeted by The Duke of Wellington, coned since 1980 as a nod to the flippant humour of the local population and nearby student body. Although municipal government has attempted to pass laws regarding the traditional coning of the Duke on grounds that the prank is a potentially dangerous procedure, public consent generally rests in favour of keeping the cone on Wellington’s head.

The statue was an entertaining prelude to to the rest of the museum. I have to say Glasgow’s MOMA was much more enjoyable than the one in Edinburgh’s. Each exhibit was accompanied by a detailed rationale and we found the exhibits more aesthetically pleasing. In other words, the art was explained and looked pretty. I know, I’m uncultured.

The one below was one of my favourite exhibits: cardboard representations of all the cathedrals found in Scotland. 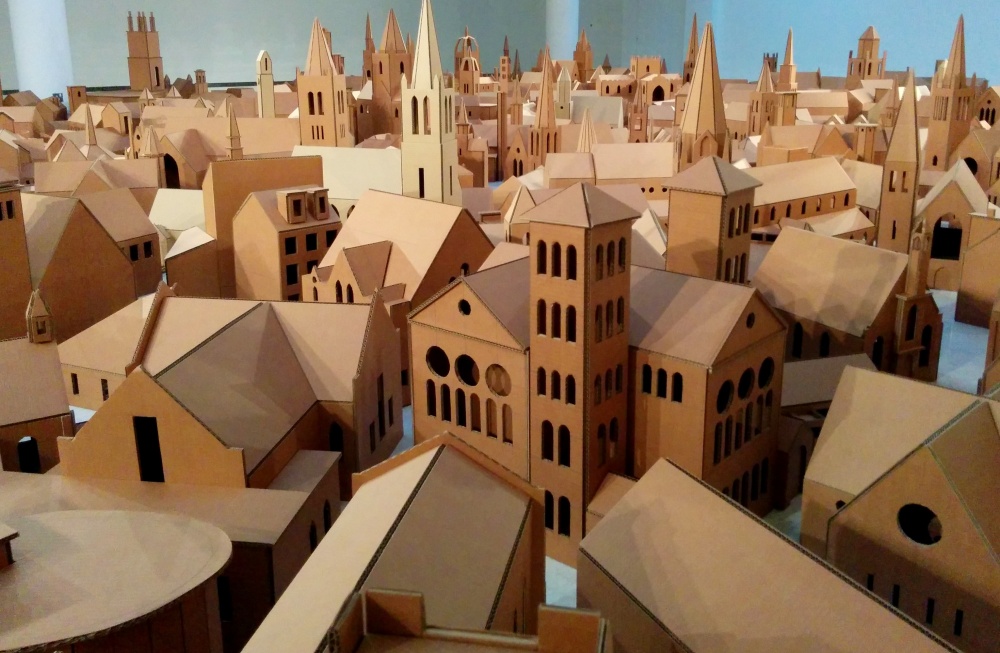 This one was Jack’s favourite – he enjoyed the idea of forming a visual with words formed by thin strips of caution tape. Very meta. 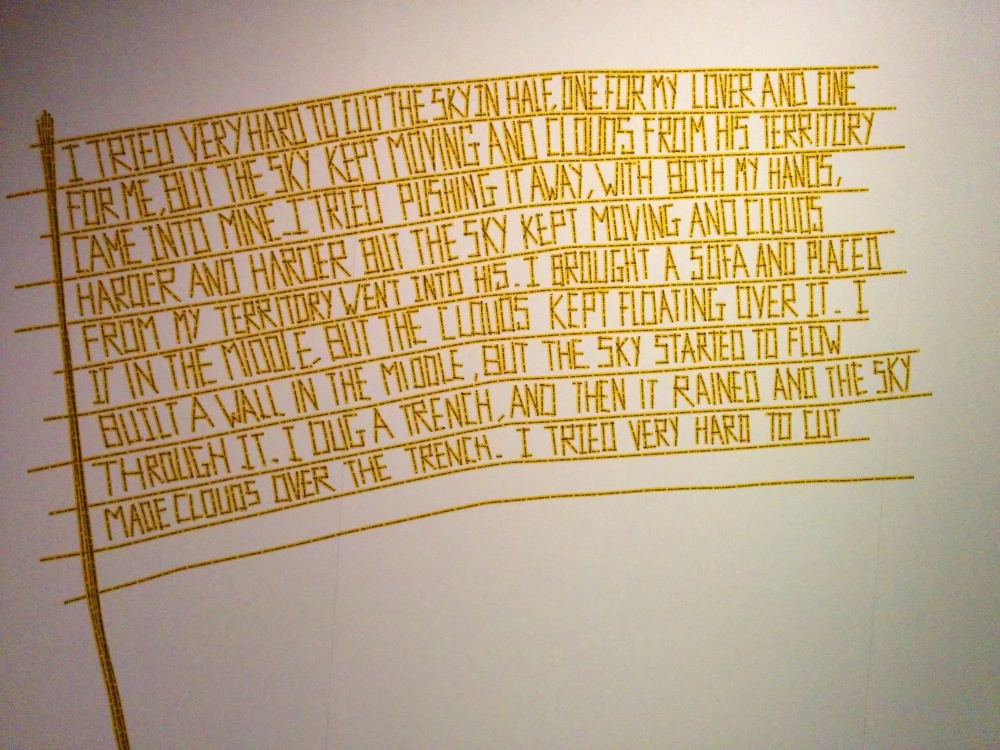 After wandering happily through that museum, we ended off our appreciation of modern art at the Willow Tea Rooms, a famous tea shop known for its designs and furniture by none other than Charles Mackintosh. This was also our first real tea time. The stack of food didn’t look extremely substantial, but once we got down to it we were pleasantly surprised to find out that the tea was quite filling. On the bottom layer you see a variety of sandwiches: lox and cream cheese, cheese and pickle, egg salad and cucumber and cheese. On the top layer are two sultana scones accompanied by clotted cream and raspberry preserves. On the middle layer are two slices: apple pie and pecan cheesecake; and two biscuits. We ate them in order and by golly am I ever a fan of tea. 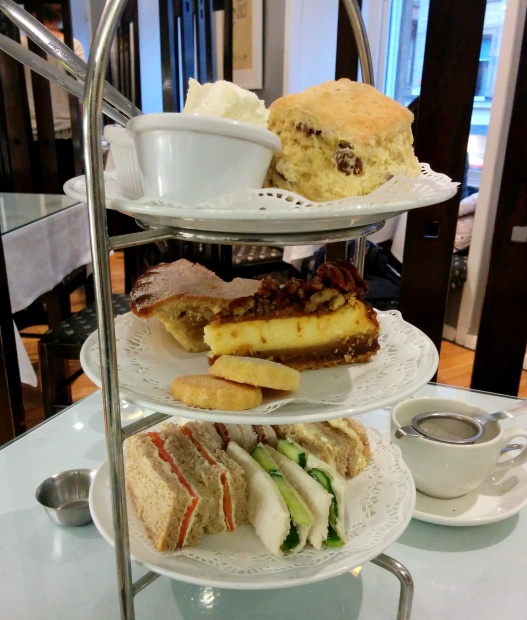 Surprisingly my favourite part of the meal!

Speaking of tea, there were dozens of varieties for us to try. I opted to try a honey almond blend while Jack went for a fruity herbal. My favourite part ended up being, surprisingly, the scone with clotted cream and preserves. Somehow the clotted cream made the entire scone much lighter in the mouth, and the delicate almond flavour of the tea was the perfect companion.

You’d think that tea would be a good note on which to end, and so end we did. We rested at the hotel, popping outside only to have curry at the nearby J.D. Wetherspoon’s.

The final morning began with a fond farewell to the breakfast buffet. We walked over to the oldest house standing in Glasgow, Provand’s Lordship, wandering first into the herbal garden and then peeking into every nook and cranny of the building (and, of course, there was no photography allowed inside). We also entered unexpectedly through a back entrance, to the surprise of the friendly staff manning the house. 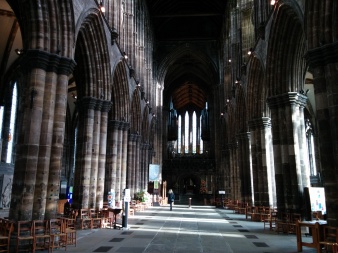 With a last look at Glasgow from the top of the Necropolis, we began our trek down back towards the hotel where we would pick up our luggage, and then into the pub beside for fish and chips, and then to the train station where we would find ourselves surprised by all the food first-class had to offer, courtesy of Virgin Rails.

And that was Scotland! Lang may yer lum reek!