You would have thought by now that I’d have realized maintaining a regular blog takes a lot of time and commitment. But nope, I’m still just starting to learn, just like we’re still learning a lot living on our own for the first time in our lives.

Let’s talk about groceries, since a big part of living on our own means we have to buy our own groceries. We’re fortunate enough to be located near several supermarkets as well as several produce stalls, which means that we have the freedom to compare prices and try and make better decisions. Groceries in our area are much cheaper than groceries in Canada, anywhere. Surprised? Me too.

The groceries above were all purchased from varying markets at the low cost of £15, which translates to just over $28 CAD. Dairy is much cheaper here; for example, a 4-pint bottle of milk costs £1 and a stick of butter (16 oz.) costs 90p. A Chinese warehouse/supermarket nearby ensures that we have access to noodles and cheaper cuts of meat and a produce stall right by our place sells fruits at £1 / bowl, which usually works out to a lower cost than the nearby Sainsbury’s and Tesco.

Apart from Jack being wonderful and always on top of keeping track of our spending, the other thing that limits our weekly grocery trips is the storage space we have. Our fridge is almost half my height, which should tell you that it’s very small.

Of course, touches from home are always appreciated and so it was with anticipation and happiness that Jack and I received our first big care package from home, put together by a handful of our friends in Calgary. Not only did they include socks to keep us warm, but there was Sriracha mayo (seriously the best sauce for chicken nuggets and omelettes), laksa soup mix, noodles, bulgogi marinade and maple syrup. 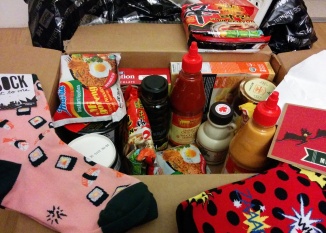 Before you roll your eyes and think, “Oh, how Canadian,” you must understand, England is severely lacking in maple things and a small jug of genuine Canadian maple syrup can sell for as much as £6 / 250g bottle. Although British imitations are cheaper, they just can’t compare, and Jack and I had been craving the Canuck touch to my homemade pancakes.

I suppose if teaching doesn’t work out we’ll just start a black market for maple syrup.